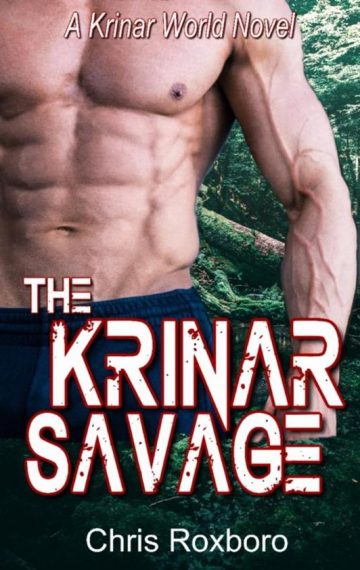 Author’s Note: The Krinar Savage first appeared in 2018 as a novella in the Kindle Worlds program. Taken off the market for a while, Chris Roxboro decided to remaster and expand the novella version into a full length novel.

An exile on Outlier 27, Savich hasn’t seen another Krinar except his friend in three quarters of a millenium. Surrounded by carnivorous and venomous reptiles, Savich has honed his killer extincts until he’s a walking, talking weapon of mass destruction. But his friend Kumar is convinced the uncivilized Krinar could help his cause on Earth, finding the location of a human Resistance settlement deep in the Kwadacha Wilderness of British Columbia.

In spite of his misgivings, Savich decides to help his friend, only to have his mission sidetracked when he stumbles across the beaten and broken body of a dying human woman. The killer becomes her savior, until his lust for revenge threatens to consume them both.

Tabby’s rescuer is a Krinar, but in spite of his alien ways, she can see the tender and caring man beneath his battle scars. While she heals from her harrowing ordeal, she tries to draw Savich out of his protective shell. Can she guide him out of the self-constructed barriers that keep him distant, and can she leave her traumatic past behind? Or will Savich’s thirst for blood destroy their precarious chance at love?