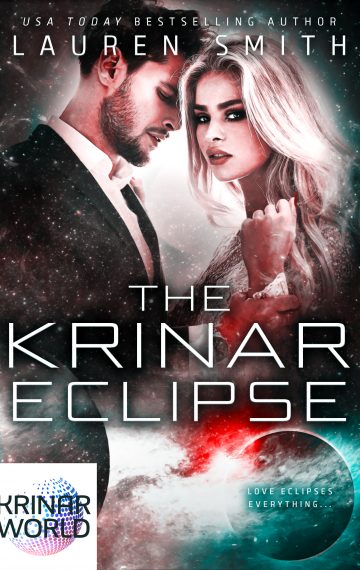 Bianca Wells, the President’s daughter, experiences a close encounter with the aliens who invaded Earth five years ago. The Krinar are powerful, attractive, but also mysterious. There is one in particular she can’t get out of her head—the seductive Krinar Ambassador named Soren. With his hauntingly beautiful eyes and god-like body, he invades her dreams, spinning sensual encounters that leave her aching and breathless. But he, like the others of his kind, is dangerous. With impossible speed and strength, wielding incredible intelligence and advanced technology, the Krinar control this planet and every human on it. Bianca should want nothing to do with Soren. A single touch from him might cause an interstellar war. But after one scorching, forbidden kiss, she’ll risk everything to be with him.

Soren came to Earth to ensure the survival of his people, but now he has one desire: to possess the brave and irresistible Bianca. Knowing he could destroy peaceful relations with the humans if anyone sees him with her, he takes matters into his own hands, rescuing her from an assassin. After one “big-bang” of a kiss, he knows he can’t let her go home. She belongs to him, and he will break every rule in his carefully controlled world to keep her.

After their forbidden night of passion, Bianca enters Soren’s dark, seductive world. But her new life as Soren’s woman puts a target on her back, and her status as First Daughter only makes things worse. As enemies surface all around them, Bianca realizes she will have to trust Soren with her heart, even if it means giving up her freedom.