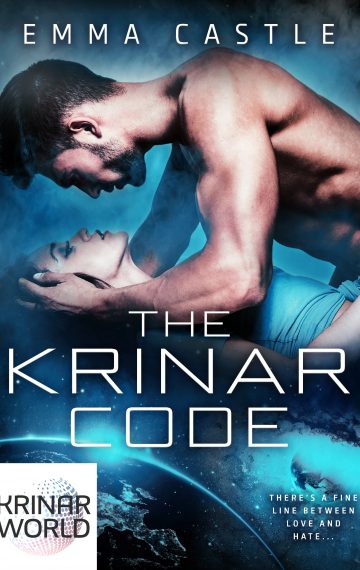 She isn’t supposed to fall in love with him… He’s one of the aliens who invaded Earth.

Harper King is like most humans—she works hard at her job and does her best not to think too much about the Krinar. The mysterious aliens took over her planet five years ago, and since then, rumors have surrounded them… whispers of super strength and speed, incredible beauty, and advanced technology. Harper should hate them, since her parents died the day they invaded, but something about the infamous Krinar fascinates her. Little does she know that the sinfully gorgeous drifter who rescues her from a bar fight will give her the close encounter she’s always dreamed of.

Sef is supposed to be infiltrating a human resistance group, not seducing sweet little human females. But from the moment he sets eyes on Harper, he knows he must have her and will do anything to possess her. Using his human disguise, he lures Harper into his arms and his bed. When it’s far too late for her to escape him, he reveals that he’s a Krinar, one of the powerful and terrifying aliens she’s always wanted to meet. He gives her a choice: to save her brothers, she must give herself to him—heart, body, and soul.

Will she choose her dark, seductive alien lover to save her family? Or will she resist the secret desires of her own heart in order to be free?