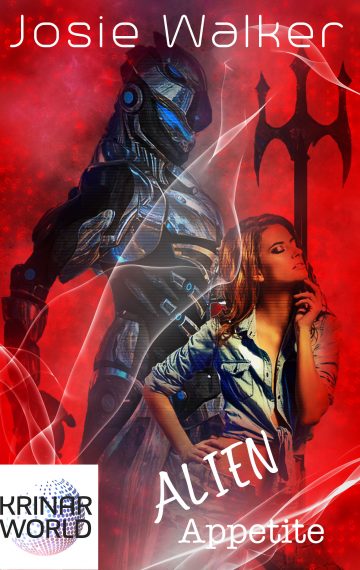 Tessa is beginning to regret her impulsive decision to sneak onto an alien spaceship. She’d wanted to keep her best friend safe and enjoy a nice interstellar getaway free of charge. But everything goes to hell when an unknown race of aliens crashes her space vacation and kidnaps her along with a group of terrified Krinar females. They seem more like robots than aliens, with bodies covered in an impenetrable layer of thick cold metal, yet their shape is still manly.

One of the aliens in particular seems to be very interested in her. She’d tell him she was “flattered, but no thanks,” if she thought he could understand her words. The only sounds he makes are like clicks and glass breaking, which means they have a lot more than a language barrier standing between them. So much for her useless high school Spanish class! He seems to want her, but what if he wants to use his weapon hands to skewer her? Or is he motivated by hunger of an entirely different nature?

If the latter proves true she really, really hopes he doesn’t want to hold hands, because that looks about as dangerous as making out with Edward Scissorhands.